Skip to the content
Coming to Korea you’re in a divided country, still at war. The split in 1949 has never healed. In mid-August, North Korea planted landmines outside a South Korean guardhouse in the mis-named Demilitarised Zone (DMZ) and two soldiers lost limbs. For two weeks there were hostile exchanges, with troop buildups and S Korea broadcasting The Voice of Freedom radio station (including K-pop) on banks of loudspeakers.
On the weekend I took a train about an hour out of Seoul to  Paju for the DMZ Documentary Festival. Under the slogan ’Shoot the DMZ’ the festival says it ‘wanted documentaries to show the vision of peace and unification for the future beyond the divided reality which the DMZ symbolizes’.
Lots of films, mostly feature length, in smart cinemas in the Megabox chain, all about half an hour from the DMZ.  There was a very wide range of films in the programme.
I saw three films. Holy Working Day, a graduation film about young Koreans picking onions in Australia; an overlong film about a group of Korean yarn bombers called The Knitting Club (maybe I’m biased as I’m also involved in a film on yarn…); and the Australian-produced Aim High in Creation!, by director Anna Broinowski. The festival had invited Anna and many of the directors from abroad to do Q&As after the films, and it was easy to access them.
Anna’s film was a funny and well handled account of her quest to make a propaganda film in the North Korean tradition about fracking, or coal seam gas as the film calls it. She got access to the directors, actors and technicians of the N Korean film industry in Pyongyang, and structured the film around the teachings of Dear Leader Kim Jong-Il in his 1987 Manifesto ‘The Cinema and Directing’.

The film is on Netflix – she said that although many festivals had been wary of the film and didn’t get it, the hacking of Sony’s emails by North Korea around the dreadful film The Interview meant that Netflix jumped in and acquired it. Well worth seeing.

Other directors I got talking to were Brigitte Weich from Austria, who had made  films with the North Korean Women’s Football team – we talked about Dan Gordon & Nick Bonner’s film on the men’s team (The Game of Their Lives) which inspired her to do it. And Sung-Hyung Cho, now based in Germany whose film comparing the lives of two Korean women from either side of the border, Two Voices from Korea, I wish I’d had the chance to see.  Hana Kulhankova, who runs the One World Human Rights film festival every March in Prague was also there – she showed me the 2015 programme, a remarkable range of films and subjects from around the world.

On the Sunday I got to visit the DMZ itself, on a ‘familiarisation tour’ with people invited to the festivals, and a mix of clients of the bank which had sponsored the tour. I cycled with the Iranian economic attache, and saw the Israeli ambassador’s wife chatting to two Iranian filmmakers on the tour bus about how much she liked Persian cuisine. Putting some chinks in other borders. After the standard tour of the border installations, we went on a Peace Bicycle Tour along the fence marking the DMZ – a very unusual way of seeing it.  I’ve posted the pictures on Facebook.
Having been there I’d now like to try this excellent-looking VR experience from Inner space, soon to be released on Samsung Gear VR
Divided countries seem to be a feature of my life. My mother is East German, and my late father Punjabi. Both countries that were split, one along ideological lines, one on religious lines. The South Koreans I met thought there was no prospect of their country ever being reunited with the people of the North – not until Kim Jong-Un’s ‘dynasty’ died out. The sudden pulling down of the Iron Curtain in Europe in 1989 didn’t seem to provide them with any positive examples.
The DMZ Festival absolutely had its heart in the mission to bring a spirit of change to this border area where it often felt that change was impossible.
Korea has created a Digital Media City (DMC) on the outskirts of Seoul and houses nearly all its broadcasters there. Like MediaCity UK in Salford. But way bigger.
This is the enormous HQ for MBC, one of the three Korean public channels. Check out its OTT ‘window on  the world’ promotional video on the link above. 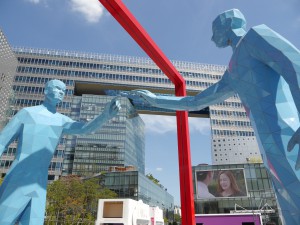 These outfits have big in-house production staff, and layers of management that would make even the BBC blush.
On Friday I went to CJ E&M, which is a huge conglomerate that runs several stations, and has a mission to ‘create a new global pop culture‘. Ambitious people. I met Hwang Jin Woo, head of Formats – who I’d first met doing a talk to Korean broadcast execs three years ago, and his colleague Sun Jin Sung.
We talked about the big shows they do – Korean versions of the entertainment shows we all know – and the drama and features shows that are the staples of their channels. Hwang is in charge of developing formats, and adapting foreign ones.
He also showed me the Digital centre. This is meant to be like Maker Studios, to encourage digital creatives to experiment.  It was empty at 11am, he said that was because creatives got up late – it would be fully booked from the afternoon till into the night. There was a green screen motion capture room, and other sets to do programmes.
And this digital content is the growth area, as every Korean young and old seems to gaze at their large screen smartphones most of the time.
In the afternoon I went to see the national broadcaster KBS, meeting Kate Hyein Cho, who I’d seen at Asian Side of the Doc, and her boss Irene Kim. Their large building is right next to the national assembly – no chance of them moving away from government to go to the DMC. A pretty conventional public broadcaster, growing old with its audience. Posters around the building encouraged staff to come up with ideas for the 20-49 age group – the assumption was the their audience would be much older.
On Monday I’m seeing EBS, the Educational Broadcaster. They’re also moving to the DMC in 3 years time.
Salford Media City is built on the same model as the DMC of a ‘creative cluster’ of broadcasters, producers and studios, and was being developed at the same time in the mid-2000s. When I saw the impressive blocks over the water at Salford Quays, I remember thinking that it had been conceived in a pre-mobile, pre-Youtube age (I mean the early 2000’s, younger readers) – when progress meant big buildings full of people. Now creativity is often talked about on a smaller scale – but with bigger reach.  It’s now more about multi-purpose spaces, places that make you want to hang out and have ideas with others, places that are connected. 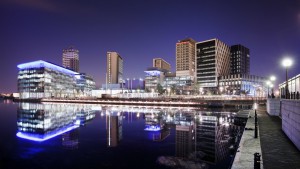 In Korea, with most production in-house, I guess the model of state subsidy for large organisations to pay expensive rents in steel and glass corporate palaces still works.  This was an urban plan all about consolidating the big state-supported production models. There is a similar state planning model for publishing – Paju Book City, close to the North Korean border, is the home to all of Korea’s publishers.
Salford has BBC North, ITV with Coronation St, Salford University and good & busy production companies Shine North run by Alex Connock, and drama producer Red. But maybe not as many small emerging companies as they’d like (with the honourable exception of the ones based in The Greenhouse).
I’m not saying this is down to the producers being resistant – in the UK, with commissioning centralised in London, the third leg of the ‘production company-freelancer-commissioner’ stool is missing and there’s no particular reason for production companies to be next to the BBC in Salford unless they make Childrens programmes.
Alex has written a lot about the effect of a creative cluster in the North of England – see his recent piece on the role of the BBC as a ‘creative kickstarter’ and what sort of investment the ‘Northern Powerhouse’ needs. Salford will grow – but with TV production contracting, the growth will probably come from telecoms, and content work for brands, direct-to-consumer, short-form, foreign clients, rather than British TV commissioning.
In DMC, the huge staff bases shunted out to work in MBC, CJ E&M, SBS (the Korean not the Aussie one!) and shortly EBS meant there were plenty of people around. The shops and cafes attracted people on the weekend, unlike Salford Media City. The transport links are good and there’s a proper station there (well, 10 minutes walk away) rather than a tram stop.
The problem of the DMC is that the ‘software’ in this model, the Korean broadcasters, don’t have a commissioning structure, and have very little idea of how to work with independents. They produce in house, pay peanuts for the occasional indie documentary, and take all the rights. Unless that changes, it’s hard to see how it would become a true creative cluster.
Digital Media City didn’t feel much like the digital future to me, unless that future is entirely corporate. There wasn’t even free public wifi that I could find. The idea that to make content all you need is a small camera, laptop editing, lots of coffee and wifi, and some likeminded young people, still seemed a long way away.